“Beef production is at a seasonal peak in June with weekly beef production since late May estimated to be nearly 7% above year ago levels,” he said. “Fed cattle prices have dropped and could be near an early seasonal low with feedlots ahead of schedule for summer marketings.”

The latest retail beef prices indicated that beef prices are declining quite slowly. The all fresh beef price for May was slightly higher than April.

“Overall indications are that beef demand is holding strong in the face of growing beef supplies.  Beef movement this spring has been good; indicated in part by the drawdown of large beef cold storage supplies to levels six percent below year earlier levels in the latest report,” Peel noted.

The U.S. Department of Agriculture’s (USDA) National Agricultural Statistics Service (NASS) released last week the June “Cattle on Feed” report. Cattle and calves on feed in feedlots with capacity of 1,000 or more head totaled 10.8 million head on June 1, 2016, a 2% increase from June 2015.

Marketings of fed cattle during May totaled 1.79 million head, a 5% increase above 2015.

Peel said the numbers were very close to expectations and wouldn’t likely provoke much market reaction.

“The report did confirm strong marketings that suggest that feedlots continue to be very current, as evidenced by declining carcass weights,” he noted. “The report also confirmed continued year-over-year increases in feedlot placements meaning that feedlot production will be cyclically higher late in the year.”

The increased placements were all in the heavy weight categories and will be marketed out of feedlots in the fourth quarter of the year, Peel added.

“Despite larger feedlot inventories and big feedlot placements, feedlots are in significantly better shape now compared to this time last year, and well positioned to handle the challenges of increased feedlot production in the coming months as long as marketings continue at a good pace.” 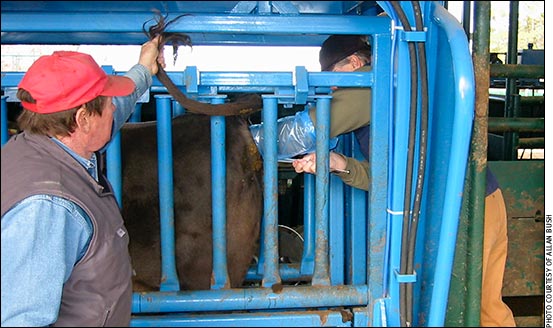 As temperatures rise, producers may need to pay closer attention to their synchronization programs.

Working cattle in hot weather can be detrimental to heat synchronization and artificial insemination (AI) programs, says Julie Walker, beef specialist for South Dakota State University (SDSU). When cattle need to be moved or worked, it pays to watch weather forecasts and try to choose a day that won’t be during a heat wave. Sometimes, however, producers need to get cattle in for a heat-synchronization program, and timing is crucial, regardless of the weather.

Walker says more producers are shifting to April-May calving to match forage with nutritional needs of the lactating cow and to reduce labor at calving to avoid having to worry about cold weather in February-March. Now, she says, they have to deal with the heat instead.

“They are breeding cows in July and August — which are often the hottest months, Walker explains. “This means that if they are putting CIDRs® in and synchronizing, and have to pull the CIDRs at a given time, they are under the clock and may have to get those cows in when it’s very hot. If they are going to do a fixed-timed AI in the morning, they are probably going to be pulling CIDRs at 7 p.m. the evening before.”

This can translate to more time and labor, particularly if cattle are away from AI facilities, she says. “If the cattle are not very close to the corrals, and we have to pull CIDRs at 7, this might mean we have to go get the cattle at 4 or 5 p.m., and that’s still during the hottest part of the day. We won’t be able to give them any time to rest and cool down and rehydrate because we have to sort off the calves before we put the cow through the chute. This often equates to 3 hours of working those cattle in the heat of the day,” she says.

Think about the heat and plan ahead, Walker urges. Consider moving cattle closer to the corrals in the morning while it’s still cool. That way, cattle are refreshed and watered before being worked, and maybe moving them will take less time. When moving and working cattle that time of year, make sure there is ample clean fresh water for them, so they won’t have any hesitation about drinking and getting rehydrated, she says.

If you’re using a fountain-type tank, make sure there’s enough water pressure to keep it full, Walker says, and make sure calves can reach the water.

“We always need to think about heat stress and take care to minimize it while moving or working cattle, because heat stress can impact reproduction,” she says. “A lot of the risk is during early pregnancy for cows, and heat also has a negative impact on bull fertility.”

Producers should also take into consideration that if you are doing heat detection during hot weather, cows won’t be very active during the heat of the day; they will be lying around in the shade to stay cool. You’ll have your best luck checking cows early in the morning or late in the evening, Walker notes, and they may be most active at night.

“When breeding cows that late in the summer when it’s hot, it really helps with the heat detection to use patches on them, to know which ones have been ridden,” she says. “We may not be out there during the coolest part of the day or night to see the riding activity, so we can use that tool to help us identify the cows that need to be inseminated.”

Many a cow-calf producer has declared that the packer reaps the rewards from the high-quality genetics produced on the ranch. The math tells a different story.

“It’s been declared in many a cow camp and auction barn café, ‘I sell calves, and the packer is the one getting all of the premiums for my high-quality genetics,’” observes Paul Dykstra, beef cattle specialist with Certified Angus Beef (CAB). To determine whether or not that’s true, Dykstra did a little mathematical noodling to figure out what the recent $23 per cwt Choice-Select spread would do to improve the feedyard’s grid premium-discount structure for Choice carcasses.

The national average is about 70% of the fed cattle will grade Choice. Since packers are willing to pay for above-average cattle, Dykstra took the remaining 30% from 100% and multiplied by the Choice-Select spread to arrive at the premium for each Choice carcass. The resulting carcass premium was $6.90 per cwt using the $23 per cwt spread (Figure 1).

“Take that back to the rancher’s pocketbook with the other math in the table and you can see it puts an added $9.10 per cwt. premium there, on top of the price for a 650 pound steer, provided that two or more buyers are competing to own these Choice-grading type cattle,” Dykstra says.

A more typical $8 per cwt Choice-Select spread contributes about 3.30 per cwt to the bottom line on that 650 pound steer, he says. So the near-record spread we’ve seen of late makes the numbers look much better than the average Choice-Select spread. But a premium is a premium and often is worth pursuing.

But the Choice-Select spread isn’t the only quality-based premium out there. “That’s why we’ve got to consider the additive value of Choice premiums with perhaps 10% or more Prime carcasses at $18 per cwt. over Choice and let’s say 50% CAB carcasses at $5 per cwt over Choice,” Dykstra says. “We’re quickly back to adding almost $8.90 per cwt to the value of our 650 pound steer, even with the ‘normal’ $8 per cwt Choice-Select spread. But maybe ‘normal’ is out the window.”